The city of Cacak is located in the tourist region of West Serbia. It is 120 km away from Belgrade, and is the centre of the Moravički region, including several other towns such as Gornji Milanovac, Ivanjica, Lučani and Guča.

Located mostly in the West Pomoravlje region, the city of Cacak provides a natural gate between the undulating hills of Šumadija in the north and the hilly and mountainous landscapes of the inland section of the Dinaride Mountain Range in the south. The central part of the city area is the Cacak valley, nestled among the mountain Jelica in the south, mountains of Ovčar and Kablar in the west and Vujan mountain in the north, while remaining flat and open to the east and the valley of Kraljevo. The slopes of the surrounding mountains are on a gentle descent towards the valley of Cacak and the course of the Zapadna Morava river, dividing the valley in two halves.

The city territory occupies an area of 636 km2, including three distinct types of relief: 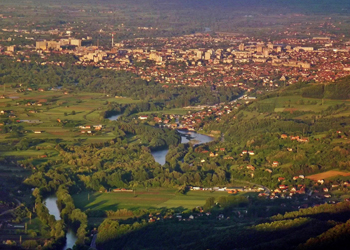