The Ovcar Kablar Gorge is an area of outstanding natural beauty, well-known for its monasteries clustered together on a small area of land, known as “Serbian Holy Mountain”. On the slopes of Ovcar there are monasteries Sretenje Monastery , Sv. Trojica, Vavedenje, Vaznesenje, Preobrazenje and on the slopes of Kablar there are Jovanje, Uspenje, Nikolje, Blagovestenje, Church of St. Elijah - Ilinje There are two more sacred places with chapels Church of Saint Sava and Kadjenica.

The Blagoveštenje Monastery is situated on a hilltop of Mount Kablar, above Ovčar Banja Spa. It is on of the very few monasteries in the gorge with a known time of construction and known founders. Tthe inscription over the entrance to the church shows that the church was raised in 1601/02. The church was built in Raška-style in arcitecture and it is on of the most beautiful monasteries in the Ovčar Kablar Gorge, surpassed only by Sveta Trojica. The Monastery of Blagoveštenje keeps one of the oldest preserved church books, the Gospel of Blagoveštenje, created in 1372, as well as a rare copy of printed Four-Gospel dating back to 1552. 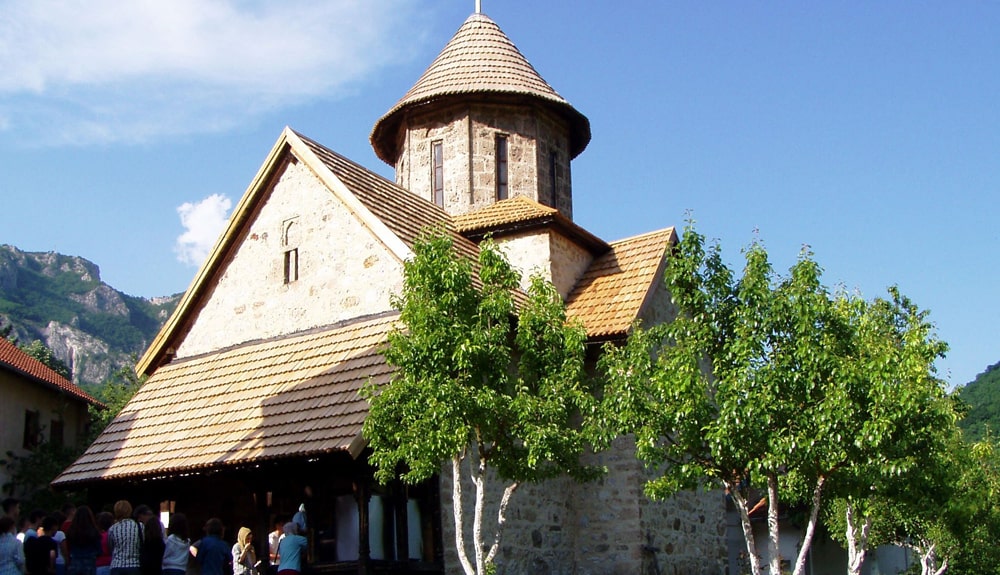 The monastery is also known as the place where the late patriarch Pavle of the Serbian Orthodox Church took his monastic vows. 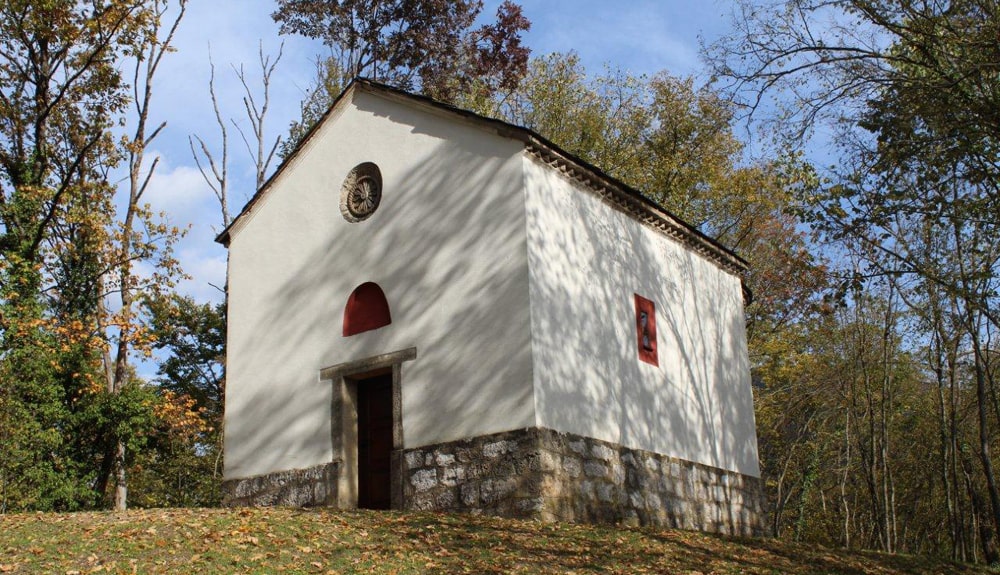 The monastery of Saint Eliah is situated above the Blagoveštenje Monastery. Although no record has been preserved of its origin, being in the immediate vicinity of Blagoveštenje Monastery, it is believed that the curch was built by the monks, as their metoh (a small church and land arround it). The present-day edifice was built in 1938. on the site of the old monastery.

The Jovanje Monastery is situated on the left bank of the river West Morava, on its biggest meander. There is no reliable evidence of its origin. The old church dedicated to Saint John was submerged in 1954, during the construction of the water reservoir for the power plant. Almost all traces of the old monastery have been demolished in the numerous devastations and destructions suffered in the course of its history, including the treasury of the original big temple. The most valuable objects in the treasury are two icons dating from 1850. 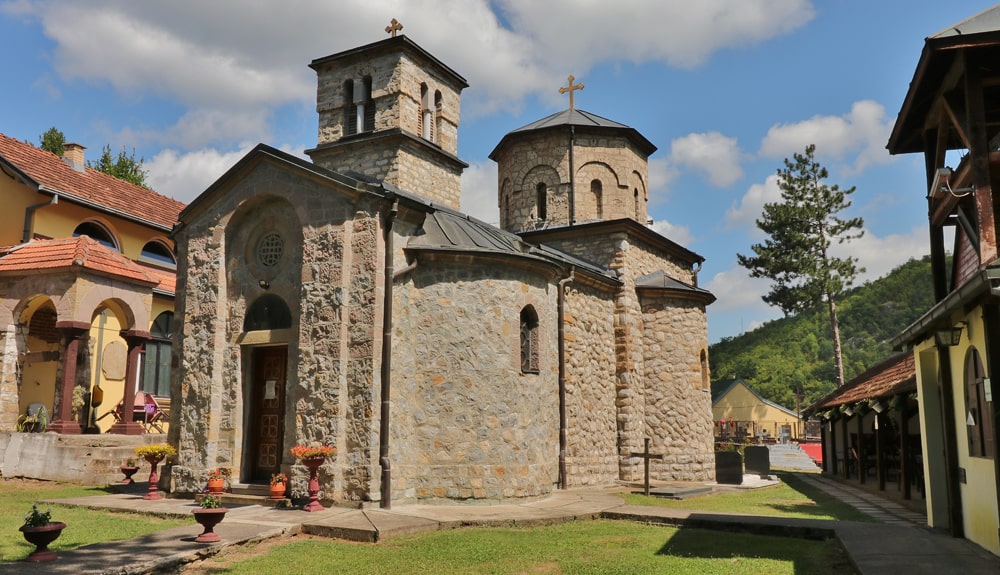 The present-day monastery of Jovanje has been designed as an amalgam of the old and more recent forms in sacral construction, making a unique contribution to the body of the Ovčar and Kablar monasteries. 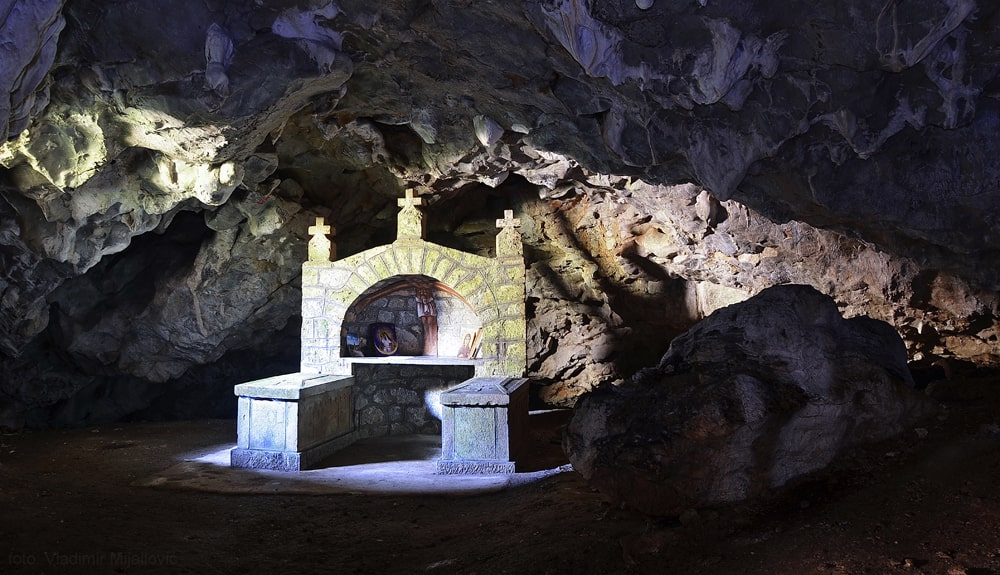 The Kadjenica cave is situated on the right bank of the river Morava, upstream from Ovčar Banja. The entrance to the cave does not have a structured access to assit the visitors. The main chamber, with indications of cave decorations, is at the same time the sacral and memorial site. Two stone sarcophaguses and a Crucifixion of Jesues are a testimony of a tragic event that took place here in 1814, during the Hadži Prodan rebellion against the Turks.

During the times of bloody turmoil, a large number of Serbian refugees from nearby villages took refuge inside the cave. However, having found them, the Ottoman Turks closed the mouth of the cave with straw and wood, setting it to fire, so that all the people inside the cave choked in smoke. Since that time, the place has been known as the Smoke Cave or ‘Kadjenica’ (‘kad’ – smoke).

The Nikolje Monastery is home to the oldest among the churches of the Ovčar and Kablar gorge, and it was erected on the slopes of Mount Kablar, on the left bank of the river Zapadna Morava. Based on its architecture features, it supposedly dates back to the Middle Ages, most probably from late 14 th and early 15 th centuries. The monastery shrine keeps the most significant hand-written book of the Serbian cultural heritage, the Karan Gospel dating back to early 17 th century. 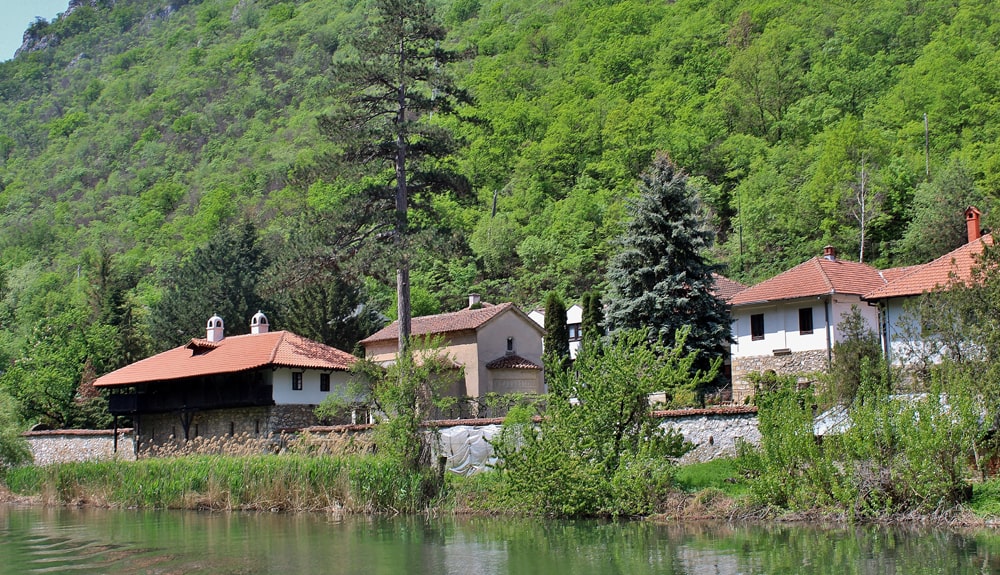 At one time, the monastery was home to up to 300 monks, and is also known for providing a refuge for Miloš Obrenović and his family in their escape from the Turkish soldiers. In 1817, Miloš helped the construction of the monastery residence inside the churchyard. This edifice is still used today and is named after its donor. 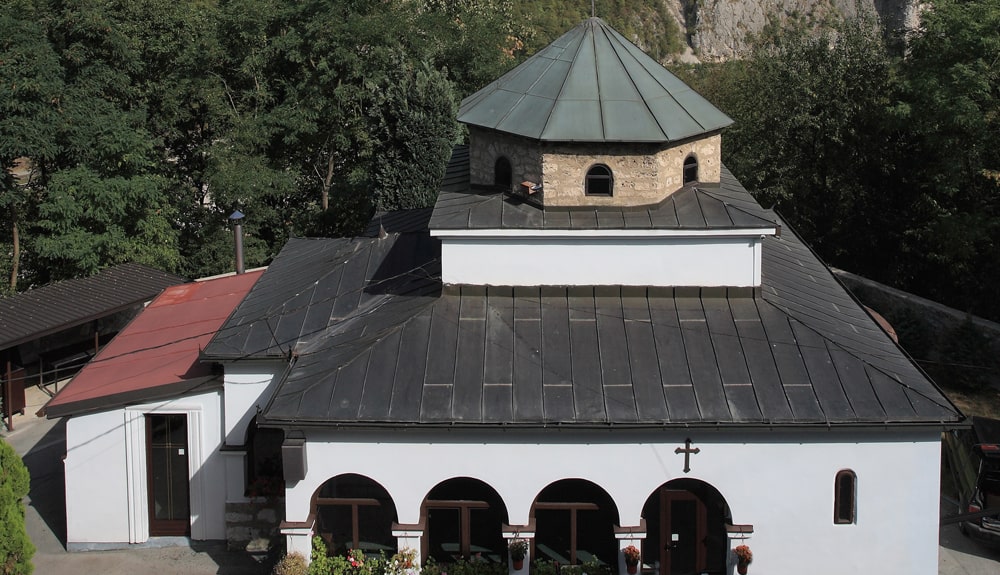 The Monastery of Preobraženje today is situated on the right bank of the Zapadna Morava river, on the north hill-sides of Mount Ovčar. The old Monastery used to be at the site of present- day railway station in Ovčar Banja, beneath the high and steep cliffs of Mount Kablar. The first written records of the monastery date back to 1525. The old Preobraženje Monastery was pulled down for the purpose of the costruction of the railroad to Užice.

Bishop Nikolaj Velimirović took an iniative to erect a new Preobraženje Monastery in 1938. Today, the monastery is a building with a square ground plan and low altar apse. The Monastery is not allowed to have any property or a parish, according the rules of the Holy Mount and has a missionary role.

Underneath the steepest cliffs of the Kablar mountain, there is a crevice in the stone wiht a spring of fresh mountain water. The water is traditionally called Saint Sava’s water and is believed to cure eye ilnesses and headache. A small chapel was built near the water spring and under an overhanging cliff. On festive days, the monks from the Monastery of Transfiguration come here for religious service. 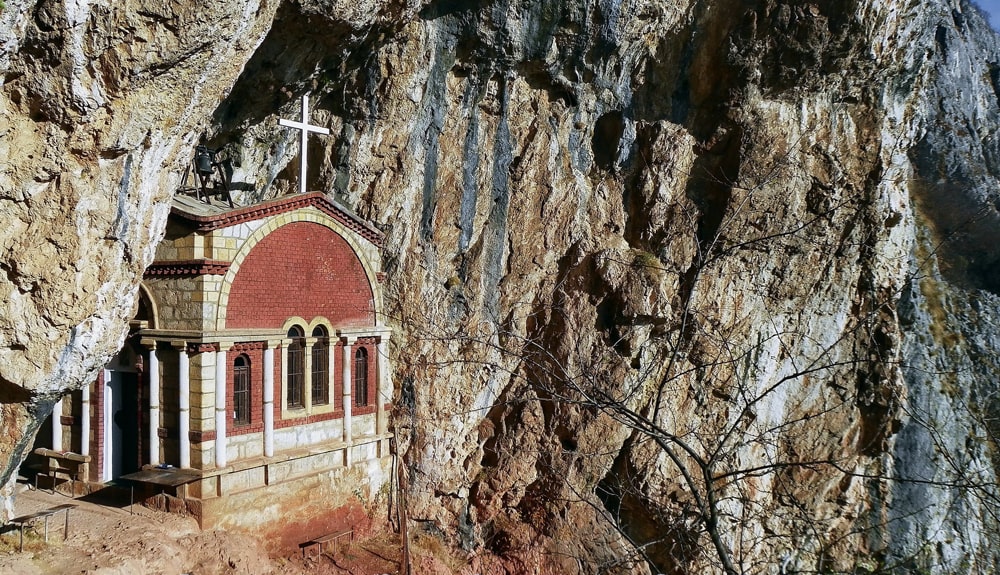 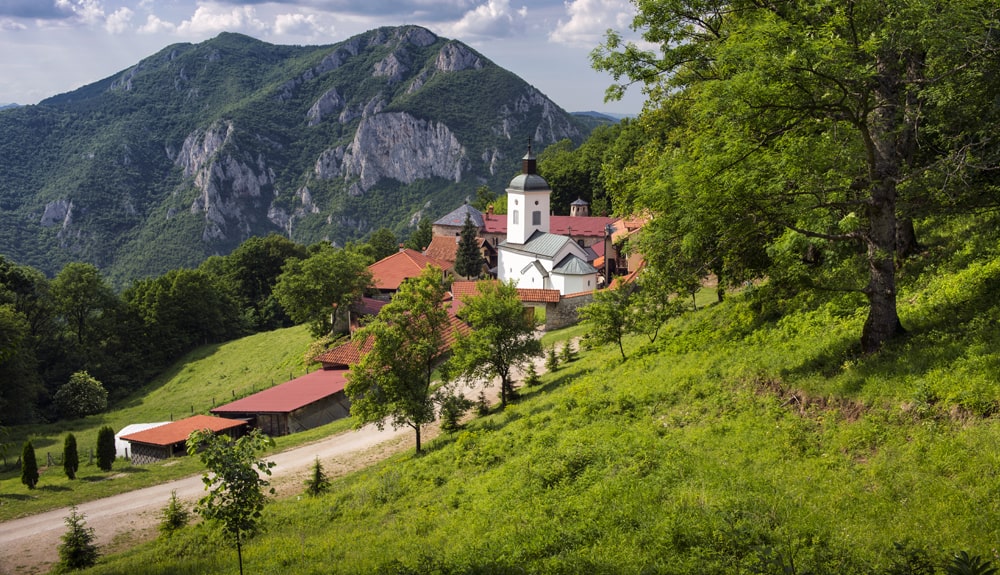 The Monastery was raised on a hilltop underneath the top of the Ovčar mountain, in an exceptional natural environment. According to the research work done so far, it is believed that the Monastery was raised in XVI century. The monastery was burnt down and ruined on several occasions in the past. It was restored thanks to the monk named Nikifor Maksimović, who later became the Bishop.

There are only three preserved hand-written books that are still kept in the monastery today: the Gospel, the Canon of the Mother of God and the Prayer Book for the month of June, which is important because it contains the service to Prince Lazar, as an authentic work of our church literature. The treasury also keeps a collection of forged artefacts and other antiquites, a marble baptistery and rosette from XVII century, as well as the icon of Holy Mother of God, from the XVIII century.

The Church of Sv Trojica Monastery is the most beautiful church in the Ovčar Kablar Gorge, situated on the south- west forested slopes of Mount Ovčar. The founder and the date of establishment of the monastery remain unknown – however, based on the research conducted so far mainly into the Turkish sources, it can be assumed that it was raised in the second half of the XVI century. As many other Serbian monasteries, it was devastated during the Turkish conquest in the late 17th century. 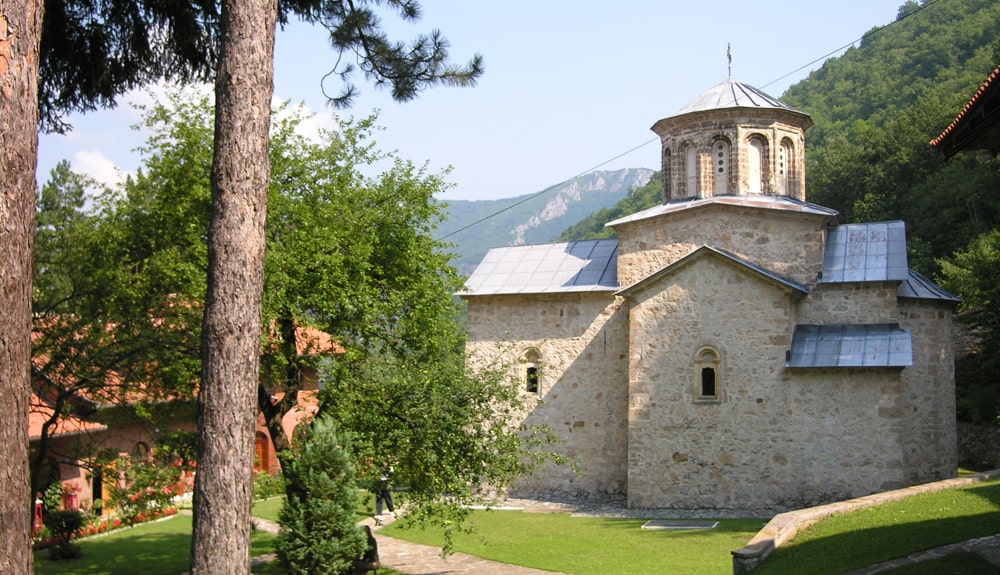 The monastery contains a big throne cross embroidered with gold and decorative silver, having a great artistic value. In addition to this valuable artefact, the monastery treasury keeps two uniquely rare throne icons, of the Saviour and the Mother of God, having a great value as antiquities. 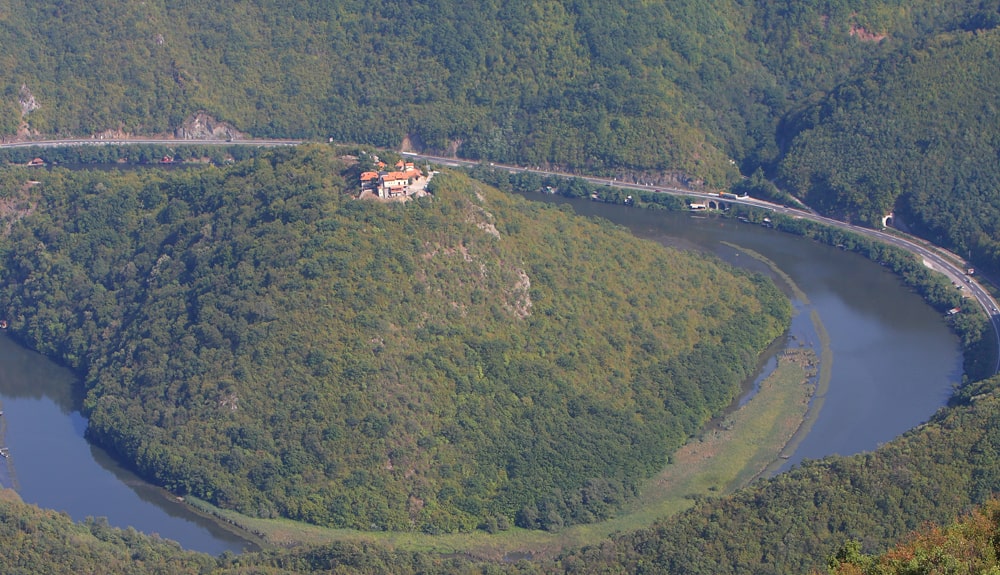 The Uspenje Monastery was erected on a hillside above the Jovanje Monastery and can been seen from all sides of the gorge. Dedicated to the Assumption of the Mother of God, its first mention is found in Turkish records dating back to 1536. At one time, it used to have a bell-tower up to thirty metres tall, which is supposed to have been destroyed by the Turks at the same time as Jovanje. The records made by Bishop Nikolaj talk about ruins found at the site.

Following his initiative, the new church of the monastery was built in 1939, as a true-to-life copy of the church in Ohrid dedicated to Saint Emperor Constantine and Empress Helena. After the first iconostasis was destructed by Bulgarian invaders in 1943, the monastery was renewed in 1998, receiving its first nuns in 2004.

The Vavedenje monastery is situated at the entrance of Ovcar-Kablar gorge. Based on the style, it is supposed that it was built in 16 th century. Among items, its iconostasis includes icons made by Nikola Apostolović, depicting the Mother of God with Christ and Jesus Christ. The gold-plated holy doors on the iconostasis with the representation of Annunciation have also been preserved. The preserved old icons are a valuable addition to the otherwise modest artistic whole of the iconostasis. 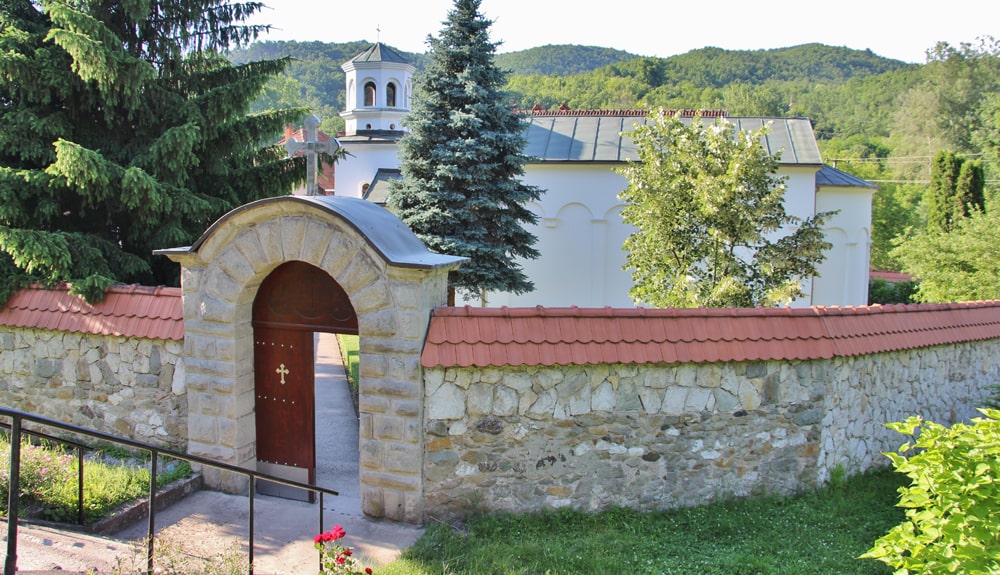 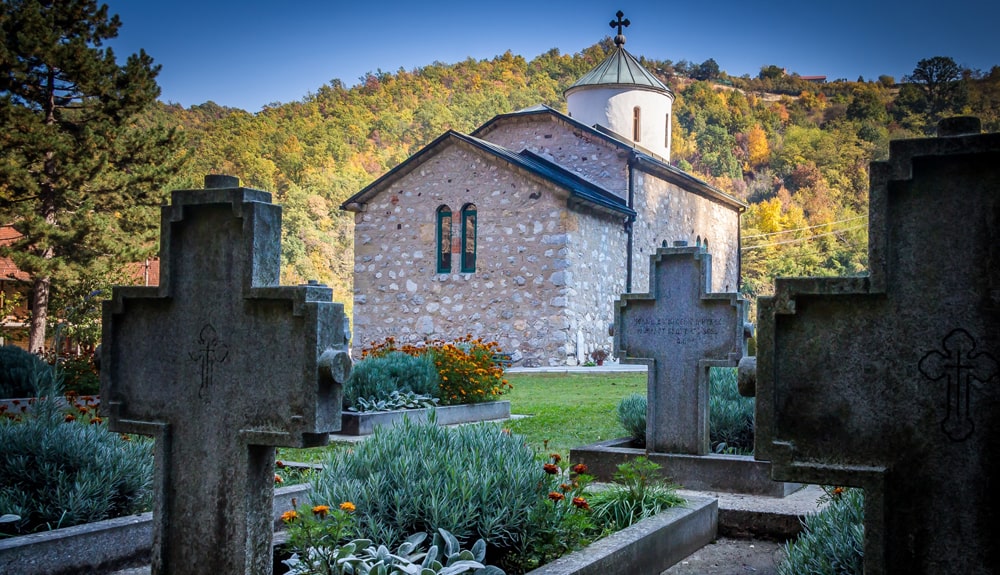 The Monastery of Vaznesenje was erected on the north slopes of Mount Ovčar. Owing to the Gospel Manuscript written at the Monastery of Vaznesenje in 1570. we are sure that the monastery existed in the XVI century. It can also be assumed with certainty that it was demolished and devastated in 1690, during the Great Exodus of the Serbs. After a number of unsucessful attempted renovations, it was finally rebuilt in 1930s, following the initiative of Bishop Nikolaj Velimirović. 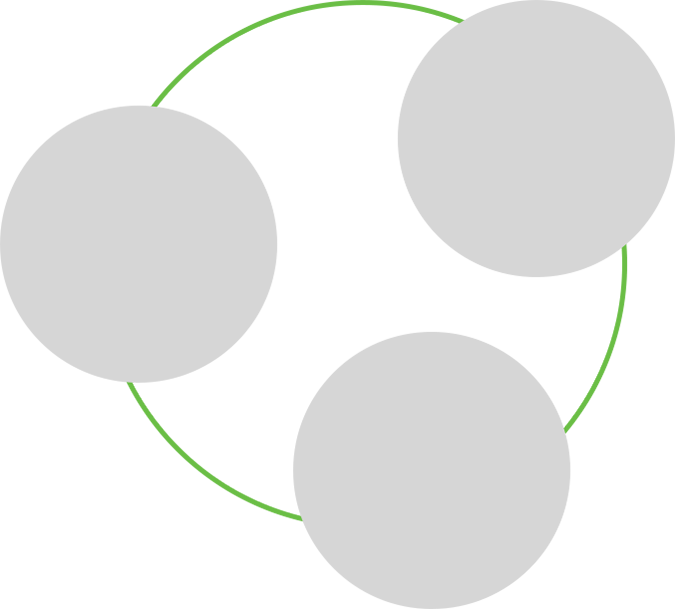